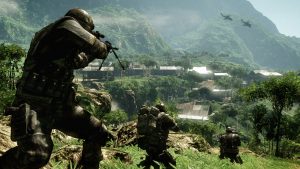 With the new DLC packs detailed from Battlefield 1 I started getting interested in buying the game. Among the people I speak to there is often more interest in the Battlefield series than the Call of Duty series. The big points of differences I always hear is that the Battlefield series seems more team-orientated compared to Call of Duty. In Call of Duty you can lone wolf through the matches a lot better whereas in Battlefield, the emphasis seems to lie more on teamwork. You can’t drive around and shoot on the time in some of the vehicles for example and capturing objectives goes quicker with more people around.

Although Battlefield has been around for a long time, my first real entry with friends was BF: Bad Company 2. The first thing that comes to me was the ability to use destruction to your advantage was a fun strategy to use. Bad Company one was the first to use this kind of destructibility in the series, but that never got released on the PC. At the end of a round in BF:BC2 there was usually nothing left but debris to cover behind. Destruction became a staple of the series and they kept trying new things with it. In battlefield 4, you gained the abilities to change a large portion of the map by creating floods or collapsing a building. It made the end game of a match different and made you think differently on how to take on the map. 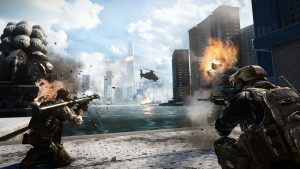 Another thing that makes me remember the battlefield series fondly is how visceral war feels in the games. The sound design became better and better throughout the series. The explosions, bullets and screams all feel real and loud. And thanks to the increasing realism of its graphics the experience of being in a war zone became more and more authentic.

Teamplay has shined through the series. There were always more community driven servers that cater to all sorts of players. Think of servers that enforce a pistol only rule or one map 24/7 servers. Platoons made it easy for players to group up and form clan like entities. You always had squads in teams that you could join. And the gameplay was formed around it. Fighting for capture points together, riding your mates around the field in tanks, helicopters and cars.

Now I haven’t been able to play Battlefield 1 yet apart from its beta. The feeling of war was definitely there and seeing how server browsers, squads and platoons are still there I’m sure a community can still thrive in the series newest addition.