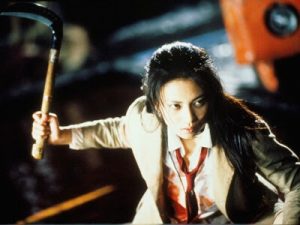 I’ve been a fan of the film Battle Royale (2000) since I saw it. The concept is simple. Society, especially its youth, started slacking and becoming more and more uncontrollable. In order to control it they started lotteries around schools. If a class is chosen it is shipped to an island where they will have to kill each other until one person is alive. It’s an terrifying concept. It’s gritty, cruel but seems a perfect idea for a videogame. Before the Hunger Games(2012) there weren’t really any successful mods or games that tried to capitalize on this idea. But Hunger Games revitalized this idea. Although Hunger Games has a slightly different concept it did bring out a few successful mods that retain that very feeling I wanted to get from a Battle Royale experience. 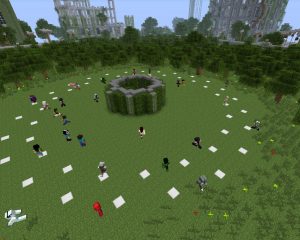 The first one I tried was the Hunger Games mod in Minecraft. You all started out in a circle with loot in the middle. You could go for it, but if you were too late or unskilled you were pretty going to be slaughtered by the other people there. Instead, you could also opt to go into the map and find items in decrepit and destroyed city. But you had to stay on your toes since people could pounce at you when you least expect it. If you end up dying you’re dead for good.  It was thrilling and made me hunger for more. Every round my heart was racing.  I was on edge whenever I heard a sound. Killing became scary and the less people there were the more dangerous the map started to feel.

Throughout the years more and more games or mods started to pop up. Games like Rust’s Battle Royale mod (2015),  The Culling(2016) or H1Z1: King of the Kill(2016). I haven’t played any of those or only played a small portion of it so I can’t say much about them sadly. But then another game popped up and caught my eyes: PLAYERUKNOWN’S BATTLEGROUNDS. (edit: smart of them to capitalize their title.) 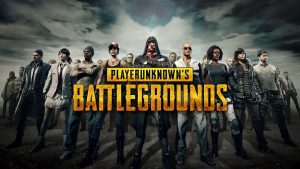 This seemed to be the closest to the Battle Royale experience I had in my head. The reason it so appealing to me is its realistic approach. It fooled me for a while thinking it was made on an ARMA engine due many systems and mechanics are taken from the ARMA games or DAYZ, while it is actually made on the Unreal 4 engine. The way running feels, looking around with your head and using your inventory system feels smooth and great. This also applies to the variety of guns you’ll find and use. It all feels grounded and real. The vehicles physics and jumping mechanics should still be tweaked though.

Everyone starts off in a plane. It’s starting location is random and where it will fly to you’ll never know until you’re actually in it. Once it flies above ground you can opt to eject or wait for a later time. This from the start already creates a very tactical feeling. Will you jump out at a small village where no one goes and hope there is anything good or go for the big city with  great loot but also with the possibility that you’ll be sharing it with a lot of people? It makes that you choose on a timer. If you wait too long you’ll miss your window of opportunity to jump to that location. Depending in what mode you’re playing you will either be alone, with a friend or a full squad. And it’s time to loot and hunt. You’ll be finding weapons, ammo, throwables, armor, vehicles and more. But you’ll be alert, listening for footsteps above you, people sneaking in the grass or for the engine of cars in the distance. Gunshots in the distance betray players, but it’s up to you to either hunt them down or see it as a sign to avoid that area. At some points you could hear the plane again. This is good news as that will mean it is going to drop a care package. These contain the best guns and gear you can imagine, but will also attract many others players. Watch your back. 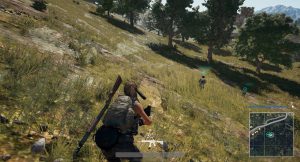 While you were looting you didn’t look at the time and now there is another other problem to your long list of issues. You see, you can’t just stay at your favorite camping location. A random placed circled zone will be shown on your map. And every time the blue circle reaches the white one, the circle becomes smaller.   If you’re outside the blue circle you’ll slowly die. So this means you’ll always be on the move, always in the open and never truly safe. Not to mention the red zones, where bombardments start. The smaller the white circle gets the more people will be cramped in the same area. It gets your heart racing seeing the zone so small, the player count low and knowing you’re close to becoming number one but that the next bullet of death could be right around the corner or behind a tree.

While the game is still in Early Access at time of writing, it’s definitely heading the right way. On August the 3rd there will be a new update adding a new gun, first person mode servers and much more. So it’s a great time to pick up the game and join the increasing amount of people who are playing PUBG in Lethal.Zone. Don’t be afraid ask to duo up or to form squads! Let’s go get some chicken dinners, guys!

Aug 31st, 201811
Share your mind on games you like if you wish, just to give it some extra momentum!
If you want to run a server and it needs a dedicated server we can always see if we can host it. Linux only, so no windows.
Subscribe to us on Reddit
or watch us live on Twitch!