Epic Games recently released their take on the battle royale concept with Fortnite: Battle Royale. From the moment you enter the party bus it is clear that F:BR wants to do a more casual approach to the genre. Its colourful and stylized art design combined with a simplified inventory system and mechanics makes it easy to grasp and works great on both PC and the consoles. This might also be the first time the console players are able to play a game with a battle royale concept!

The gameplay loop is largely the same compared to the other battle royale titles out there. You start off in the flying party bus that follows a random determined path and you can drop out where you want. The flying and glider are as smooth as walking on the ground. You can easily adjust and change direction. If a house you wanted to land on is already being occupied, you can quickly steer to another one without any problems.

Once you hit the ground it’s either fight or flight. There are weapons, ammo boxes or consumables hidden inside buildings and there are secret chests that give you more special loot. The game differentiates itself from other BR loot hunting games by the fact that you can break down any wall, door, floor or ceiling that you see. No visible door in sight? No problem, just break down the wall in front of you. Is a guy hiding below you? Just break down the floor and get the drop on him. It gives the player a lot more opportunities in approaching a building or a situation. The best part is that you can also build new things. At the start you’re limited to stairs, walls, floors and roofs. But on the map there are a variety of construction blueprints to be found. Think of trapdoors, floor spikes and more. You can build your own fort on that mountain or choose to build quick cover when someone is shooting you; as long as you have the resources to do it. Don’t spend too much on your beautifully crafted mansion though, as the zone will get smaller and smaller, quickly turning your creation obsolete. 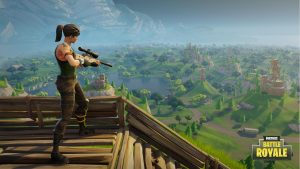 The shooting part still has its faults though. Its roots as horde shooter can be felt in the guns. The bullet spraying guns feel random with their bullets going all over the place while sniper rifles and shotguns are dead accurate. The weapon feel and sound don’t pack a lot of punch either, feeling often as if you’re firing peashooters. Due the world’s stylized nature you’ll be able to spot people easily in the open. The grass or foliage doesn’t really camouflage people as well as in more realistic games. Regarding movement, it’s simple. You can sprint, crouch and jump. I don’t think the game needs a very realistic or complex cover system. The construct mechanics and destruction gives the player enough tools and flexibility to not get hit or to give a hit. Also, there are no vehicles in the game (yet). So you’ll mostly be walking and running.

Overall, the game seems to be like a more laid back approach to the Battle Royale Concept. If you want to try it out for yourself you can either download it for free on PC, Mac, PS4 (NO PS+ subscription required), PS4 Pro or Xbox One (Xbox Live Gold membership required).

Aug 31st, 201810
Share your mind on games you like if you wish, just to give it some extra momentum!
If you want to run a server and it needs a dedicated server we can always see if we can host it. Linux only, so no windows.
Subscribe to us on Reddit
or watch us live on Twitch!